The Market Where a Train Runs Through - Youtube Star Thailand

How to visit the market near Bangkok where the train drives
straight through.

Updated 13 May 2017. After I saw one of the startling Youtube videos of a Thai market ebbing and  flowing over the tracks of a train, I had many questions. Where was the market? Could I visit it? What is the history of this line? The first leg of what is actually two lines began running around 1905 as a freight line, hauling coal from the coast to Bangkok. Operated by Danes for decades, it was nationalized during the Japanese occupation of World War II and still runs most of the original century-old steam trains today.

As for the rest of the answer:  No, you can't reach it from Hualampong, Bangkok's central train station. Nor from Bangkok Noi, the small station on the west bank of the Chao Phraya River, where the train to Kanchanaburi and the River Kwai departs.

The official name is Samut Songkhram, but it's better known to Thais and train timetables by its old name,  Mae Klong or Mae Khlong or Maeklong. Although it takes two trains on two little-known lines and several hours to reach it, the journey makes for a pleasant day trip. Best of all, with little stress, you can escape the Big Smoke and soon be gliding through clean air, countryside and salt farms. 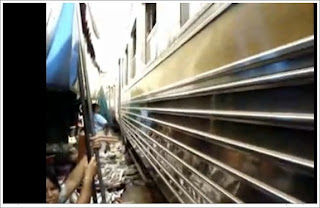 To see more of videos of the market, do a search at Youtube using “Bangkok (Maeklong) train market” or "Thai train market" or "Thailand railway market."

This video's quality isn't great but hang on until the end; you will hold your breath as you wait for the baskets of vegetables to be crushed. Obviously, the "Bangkok" designation on some videos is wrong. The small coastal town of Mae Klong is perhaps 50 kilometers to the south of Bangkok as the crow flies. Uh oh, looks like the odious Anthony Bourdain has even dragged a Food Channel crew here. You know it's a well-trodden trail when that man turns up.

The day trip begins at Bangkok's WongWian Yai station, also transliterated as WongWianYai or Wong Wian Yai. Although this station may be obscure, WongWian Yai itself isn't. It's a large (yai) roundabout on the western, or Thonburi, side of the Chao Phraya River. Like Bangkok Noi, that's across the river from greater Bangkok. With moderate traffic, it's less than 15 minutes from the Oriental Hotel, Royal Orchid Sheraton and other big riverside hotels.

Best of all, the train terminal is walking distance from a BTS Skytrain station, also called WongWian Yai. Back in 2010, this was the southern terminal station on the Silom Skytrain line. Four more stations have since been added. As of 2017, the terminal station is still Bang Wa, so look for that name on, say, the Siam Square platform or a map, if you're wondering which direction to head.

Anyway, back to WongWian Yai station. Take the north side exit from the Skytrain station. Turn left and walk to the first major intersection about one block away. Asking for the "train station in Thai --"Sa-taa-nii rot fai fa"--is probably not going to work for most tourists. But  "Maha Chai" coupled with the English "train station" might.


Turn right at the intersection into Phra Chao Taksin Road. The little station is about five minutes away, on the left-hand side of the road. If you come to the King Taksin Monument, depicting the first Bangkok king on horseback, you have passed it already.


Taking the Train from Bangkok to Maha Chai

The  small commuter train inside is like any third-class car on the regular train line. The fare to Maha Chai, or Mahachai, was a mere 10 baht but may have gone up slightly in the past few years. A train leaves about every hour for the one-hour, 31-kilometer trip to the fishing port of Samut Sakhon, better known as Maha Chai, even on train timetables. The first train of the day departs from Bangkok around 5:30 am; the final train leaves around 8 pm. Maha Chai is major fishing port and processing area for the many tuna canneries and (environmentally destructive) shrimp farms in the area.

Richard Barrow describes his own day trip to Mae Klong step by step. Richard runs the Paknam websites, probably the largest and best network of English-language sites and blogs in Thailand. It's certainly the most family- and female- friendly. Even Thais post on the forums! Unfortunately, it's hard to figure out how all the pages and websites link together.  Elsewhere, Richard describes homestays near Maha Chai/Samut Sakhon and its attractions. The most interesting are probably the ocean-swimming monkeys.

Once you reach Maha Chai, exit from the left side of the train, pass by market vendors with their baskets of fish and pink-shaded shrimps. Look for the clock tower, which is near the pier ("tha"). You must take a 5-minute, 2-baht ferry trip across the Tha Chin River.

The landing area is called Ban Laem. From here, ask the locals for "Mae Klong" or "rot-fai pai Mae Klong"  but they will most likely guess that's where you're heading. It's only a few minutes walk to the train's departure point. Four daily trains depart from here for the one-hour, 33-kilometer journey to Mae Klong. They depart at 7.30 am, 10.10 am, 1.30 pm and 4.40 pm.

Although the trip to Mae Klong only takes an hour, if you want return by train to Maha Chai/Ban Laem on the same day, the last train you can catch from Maha Chai to Mae Klong is the 1.30 pm. The last return train from Mae Klong to Maha Chai departs at 3.30 pm.

There are only four trains from Maha Chai to Mae Klong each day--departing at 6.20 am, 9 am, 11.30 am and 3:30 pm.  Bear in mind, though: schedules could well change with little in the way of public notice. Check the schedule upon arrival at a new station. Regardless, the upshot is: you must start from Thonburi early if you want to do the entire day trip by train.

Once on the train and on the way, enjoy the coastal scenery and clean air and look out for the conical piles of salt at the salt farms along the way. Arriving in Mae Klong by train, you don't get much of a view of the scurry that has taken place only moments.  You have to wait around in the market for the next arrival to get the full effect.

As you can see in some of the Youtube videos of Mae Klong station, the first scene resembles any other open market in a small Thai town: shoppers stroll a narrow aisle bordered by open stalls selling clothes, kitchen implements and colorful tropical fruits. Then, in unison, the display tables on either side pull back (they’re on wheels) as the vendors yank up their awnings and the shoppers melt away.

The train charges through that center aisle, coming within inches of the vendors and retracted stall tables. It’s over in a moment: the tables roll forward, awnings flap back in place and shoppers drift back onto the railway track. You now know why locals call it talaat lom hap which word-for-word is "market umbrella fold"--or less literally, "the folding umbrellas market."

In between waiting for trains, Mae Klong provides some modest sights, notably a Kuan Yin shrine and an Ayuthaya-era temple, Wat Phet Samut Worawihan. That means it predates the establishment of the Thonburi and Bangkok capitals and the present dynasty, whose origins are late 18th century. The location link at the bottom of this page points you to Mae Klong, more or less. But I think you get a better sense by scrolling down to the close-up Google map of Mae Klong town on this train buff's page. (He is wrong, though, when he writes that the train runs through Mahachai market.). As for the Google map that the "location" link below leads to ... I know, it's crazy: it links to a spot in the middle of the river. Scroll up and to the left and you'll see Mae Klong marked on the riverside.

From Mae Klong to Bangkok by Bus and Mini-Vans


As noted above, to return to Bangkok by train in one day, the last train from Mae Klong-to-Mahachai train departs at 3:30 pm. There's no need to panic, though.

While they aren't as much fun as trains, many daily buses travel between Mae Klong and Mahachai. Some even travel from Mae Klong directly to Bangkok's Southern bus terminal, which is on the Thonburi side of the Chao Phraya River. The bus trip should take about one hour. Slightly quicker, mini-vans also travel directly between Mahachai and Bangkok's Victory Monument. In Mahachai, you could try asking for the rot (vehicles) that go to   anu-sa-wa-ri chai sa-mo-ra-phum but I think few tourists could manage it. A better option: before the start of the day, get someone at your hotel to write that in Thai.

An alternative is to continue down along the coast to the major beach resorts of Cha-am and Hua Hin.

The shaky video below presents the view from inside the offending train: