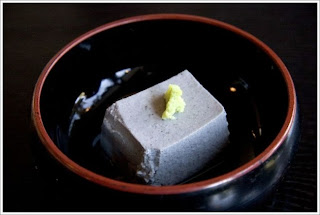 It's easy to find vegetarian food all over Thailand during these ten days every autumn.


The yearly vegetarian festival has Chinese origins but all Thais partake of the food and many adopt the spiritual practices.

Food court stands, sidewalk stalls, hotel restaurants and small family restaurants all get into the act. To spot the first two eateries, look for small yellow flags. Bigger places will indicate their vegetarian choices on menus. Every hotel dining room will have a vegetarian offering, if not an entire buffet.

The festival is a major event for vegetarians because in normal times it can be difficult to find vegetarian meals in Thailand, especially outside Chiang Mai and Bangkok. Aside from the deep Muslim South, the festival is celebrated all over the country.


Don't count on finding vegetarian versions of all your favorite Thai cuisine foods, though. The festival emphasizes Chinese vegetarian food: lots of tofu, soy, gluten and foods made to look and even taste like meats. It's much blander than Thai cuisine--no chili peppers, for sure. 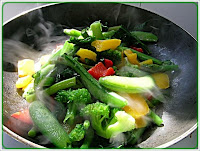 Vegans will be pleased to know, however, that neither eggs nor milk is used in the cooking. Here's a slide show that makes it even easier to spot veggie restaurants and foods during the festival. I have never seen the mock fish, though.


Besides eating vegetarian food, during the festival many Thais, especially Buddhist Chinese-Thais, wear white as often as possible, attend ceremonies at Chinese Mahayana temples, and follow precepts to keep their actions and thoughts pure. The refrain from sex, alcohol and harming animals.

On the always informative Paknam websites, there’s a description of the festival’s religious practices  and a purification ceremony at a Chinese temple in Samut Prakan, a suburb of Bangkok. Note the advice on proper clothing for visitors to the temple during this time. If you don't have white clothing, at the very least wear light colors and, of course, dress modestly with shoulders and legs covered.

On Phuket, the vegetarian festival runs from October 5-13 but culminates with the strange Mah Song parade through Thalang town. In 2013 it takes place on Sunday evening, October 13.

According to Phuket legend, the oddities of its festival originated in the early 1800s in Phuket when a traveling Chinese opera troupe fell ill with malaria while performing on the island. The opera group supposedly came to entertain Hokkien Chinese immigrants working in the rubber plantations and tin mines.


Not too be too picky but ... the first rubber plantations weren't planted in Thailand until the turn of the 20th century and tin mines probably didn't start up with any force until the mid-19th century. Anyway--in thanks for recovering from malaria, the opera players pledged to adhere to a strict vegetarian diet. The Chinese of Phuket marked the recovery annually and not just by following the precepts of a pure mind and body for ten days. Here's a more elaborate story of the legend and a schedule of all the Phuket events for 2013.
In Phuket, there are also spirit mediums, or mah song, participants. Men, and sometimes even a woman or two, are possessed by a spirit. The mah song walk on hot coals and pierce their cheeks, backs and arms with skewers, fish hooks and even razor blades.


Participants say that the self-mortification rites are associated with an old Chinese belief that they can drive away devotees' sickness and other bad luck as well as endow their communities with good fortune.  But mortification of the flesh isn't a normal practice for Buddhists, Mahayana or otherwise. It is a practice that some Tamil Hindus undergo during the Thaipusam festival, which takes place every January or February (in Penang and Kuala Lumpur, as well as many places in India). The use of hooks, knives and skewers makes me think there has to be an Indian link to the Phuket festival. Supposedly a deity protects the Thaipusam flagellants from feeling pain, something also said by the mah songs in Phuket. The Thaipusam participants also prepare by adhering to a vegetarian diet.


If you think the Phuket performances sound like too much of a circus, you might want to visit Takua Pa, a town about an hour north of Phuket where Chinese-Thais hold their own ceremonies in a more traditional manner, but they do include a procession of flagellants. If the name of  Takua Pa sounds vaguely familiar ... it was the town close to the some of the  coastal areas hit most severely by the 2004 tsunami. This is where many of the bodies were brought, identified and buried.

On the first day of the festival, the residents of Takua Pa shift every Chinese shrine in town to ko taeg poles. In a procession, the shrines are carried like palanquins in the not-so-old days. They are carried and accompanied by white-clad male devotees wielding weapons of ancient Chinese gods. In contrast, the Phuket procession has been updated with participants carrying guns and swords and sometimes even riding motorcycles.

As for the Takua Pa self-purification processions, featuring men with body piercings, skewered cheeks and undergoing other forms of self-torture, they take place on the final few days of the festival.  For more details, get a Thai speaker to call the Takua Pa municipal office at 076-424-525


New Moon of the Ninth Month of Chinese Lunar Calendar


It's a little tricky to figure out the annual dates for the vegetarian festival unless one has a Chinese calendar with the lunar months illustrated: the festival begins the day before the new moon of the ninth lunar month. In 2013, that means October 5-13. Here are lunar calendars for future years.